Half of U.S. adults paid at least one bill late during the last 12 months; consumers say the convenience of mobile payments and digital wallets make it easier to pay bills on time

SANTA CLARA, Calif., Feb. 23, 2022 – PayNearMe, the modern and reliable payments platform known for making payments easy for both businesses and customers, today released bill payment survey findings that reveal why some U.S. adults are struggling to pay personal loans, auto loans, mortgages and utilities on time. The online survey of 2,676 U.S. consumers, age 18 and older, also highlights U.S. adults of all ages want to use mobile payments to pay their bills, and that having the ability to store bills in an Apple or Google Wallet and pay via a smartphone makes it easier for them to make on-time payments.

“Nearly 1 in 5 adults surveyed (19%) say they paid a bill late because the online bill pay process was so complicated they became frustrated and didn’t complete the payment,” said Anne Hay, head of PayNearMe’s consumer research initiative. “To increase on-time bill payments, billers need to create a frictionless payment experience and, for many consumers, that means having the ability to pay their bills via a mobile device.”

Additionally, consumers can better manage their finances when they can view and store bills in a digital wallet. For example, when consumers store bills in a digital wallet, they can enable push notifications to allow engagement communications from the biller, such as electronic bill payment reminders. Nearly half of U.S. adults surveyed (45%) say receiving a text message or email reminding them when the bill is due would make on-time bill payment easier; 38% believe that a reminder including a clickable payment link would be even more convenient, according to the findings.

“When tens of millions of people are paying their bills late, billers need to adapt the bill pay process to meet customers where they are; and they are on their mobile phones,” Hay said.

Across generations, consumers are missing payments. Young adults age 18-29 are most likely to miss payments, in part, because they have difficulty keeping track of due dates (53%) and remembering passwords when they try to log in to pay a bill (51%). Adults age 30-44, who came of age with connected mobile devices, are most likely to overlook paper bills (34%) and become frustrated with a cumbersome online bill pay process (26%). Consumers age 45-60 are most likely to procrastinate or forget to pay a bill (40%). Boomers, the majority of which own a smartphone, are well on their way to adopting mobile bill pay.

“Having a mobile bill pay strategy can increase on-time bill payments across age groups,” Hay said. “PayNearMe is working with billers to enable their customers to easily pay bills directly from their mobile wallets so they can get the information they need — the amount due, payment deadline and remaining balance — right on their smartphone.”

Millions of consumers use smartphones to purchase goods and services, and the survey findings suggest they also want to use them to pay their bills.

“The majority of U.S. consumers (85%) own a smartphone, and we estimate there are billions of bill payment transactions every year,” Hay said. “It’s clear late payments don’t have a single cause, and billers need to adjust to meet the preferences of all consumers to help ease the process — and that includes offering a frictionless mobile payment experience.”

Download, “Why Consumers Pay Late (and How to Encourage More On-Time Payments),” a PayNearMe original research paper that uncovers new and surprising insights into the minds of the modern bill payer. The paper highlights trends and attitudes around late bill payments, as well as provides suggestions on how to drive more on-time payments and increase customer satisfaction in the process.

PayNearMe conducted a survey of 2,676 nationally representative U.S. adults ages 18 and older. The survey was conducted using an online survey format. Quotas were set to ensure reliable and accurate representation of the total U.S. population ages 18 and over. Results of any sample are subject to sampling variation. The magnitude of the variation is measurable and is affected by the number of survey respondents and the level of the percentages expressing the results. In this particular study, the chances are 95 in 100 that a survey result does not vary, plus or minus, by more than 2.0 percentage points from the result that would be obtained if interviews had been conducted with all persons in the universe represented by the sample.

PayNearMe today processes a variety of payment types including cards, ACH, Apple Pay, Google Pay, PayPal and Venmo, and has enabled cash payments through our proprietary cash network since 2009. PayNearMe cash payments are accepted at more than 31,000 retail locations in the U.S. including participating 7-Eleven®, Walmart®, Family Dollar®, Casey’s General Stores®, and ACE Cash Express®, among others.

Thousands of businesses partner with PayNearMe to manage the end-to-end customer payment experience in industries such as Consumer Finance, Property Management, Insurance, Utility and Municipality, and iGaming and Sports Betting. 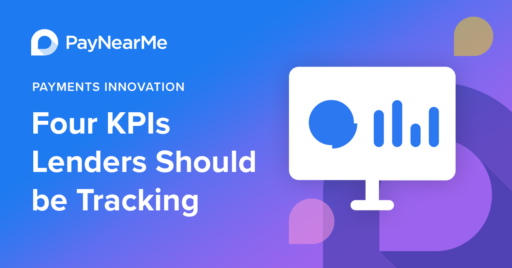 Four KPIs Lenders Should be Tracking